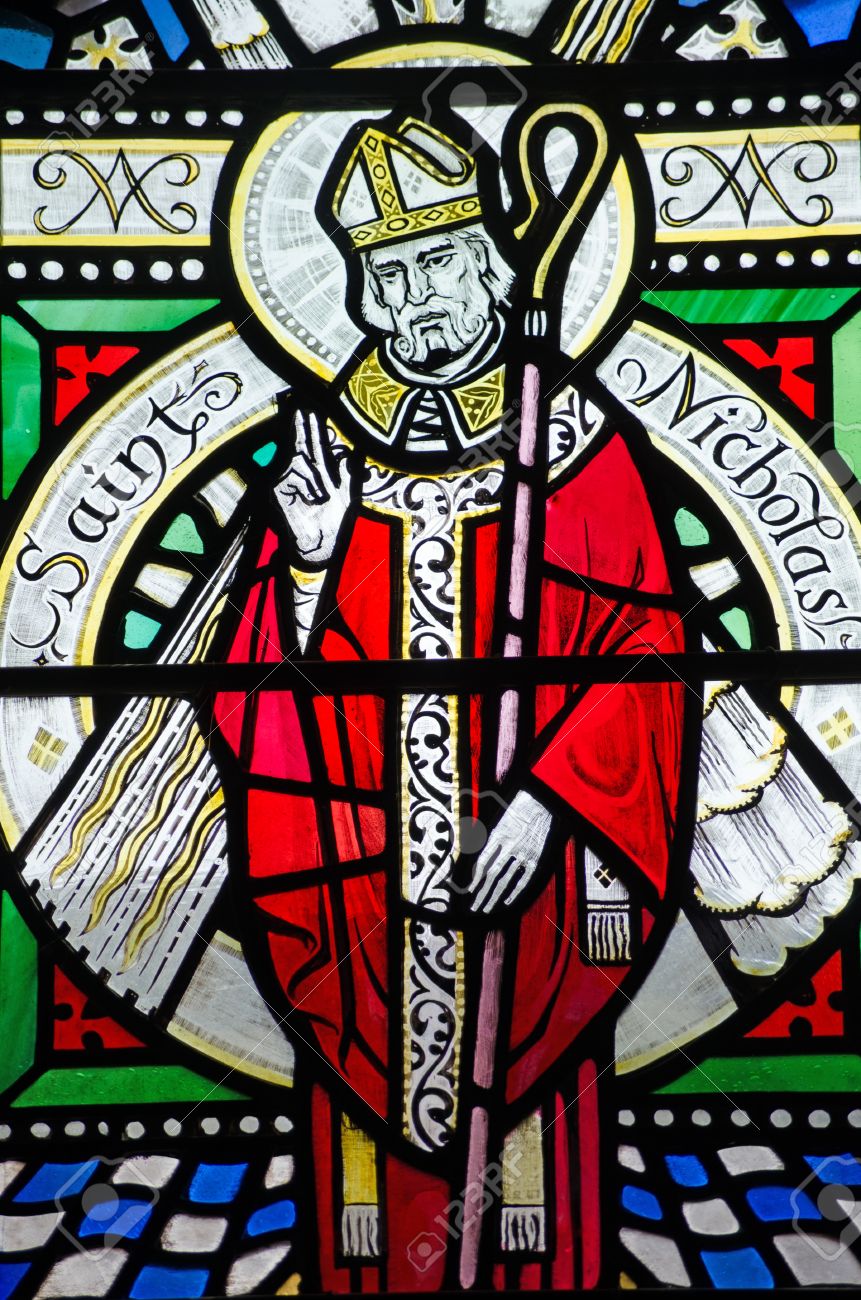 Snow was falling slowly outside the windows of Floggin’ Brews.  What with the holiday decorations, the place felt like the inside of a Christmas card.  Okay, a kinky Christmas card.

Boss seemed to be thoroughly enjoying Her tree.  She had added to the original red paracord decorations by finding small sparkly objects — a bottlecap, a lost earring, a bit of silver ribbon – and placing them on the tree.  Mikhel had accused Her several times of “acting like a crow, collecting shiny things like that.”  Boss had managed to look both offended and Self-satisfied at the same time.  And She kept collecting things for Her tree.  So far, no tinsel, but I knew for a fact that Brita was thinking of sneaking some in for Her.

Boss had just appeared from the back with something metallic dangling from Her mouth.    “Hey, Boss – what’s that?”  I asked.  She stopped long enough for me to bend down to get a closer look.  It was a single clover-leaf clamp.  I laughed.  “Looks like someone’s toy bag is missing a clamp.  Good find!”  Boss looked pleased and sashayed over to Her tree.

The wreath on the door bounced a bit as two women came in.  If I had to guess, I’d say they were in their mid-50s.  They took a moment to look around the place after shutting the door.

I gave them a smile from behind the bar.  “Greetings!  Welcome to Floggin’ Brews.”

“Hi there, and thanks,” said the one with short hair.  “We’ve heard a lot about this place.”

The short-haired one added, “We’re her foster moms.”

I gave them an even bigger smile for that.  “Wonderful!  I’m so happy to meet you, Brita has told me a lot about you two.  Too.”

The Moms started taking off their winter layers and making themselves comfortable at the bar.  The short-haired one leaned over and offered her hand.  “I’m Deb.  You must be Ret?”

“And I’m Susan,” said the other.  I shook both their hands and asked what I could get them.   They eventually decided to try two shorties of two excellent winter stouts: Prairie Artisan Prairie Bomb from Tulsa, and Surly Darkness from Minneapolis.

We chatted a bit while they sipped the stouts.

“We’re here to check the place out,” Susan admitted.  “And the people too.  Brita loves working here, but we’re responsible for her so we thought we’d better stop in and see.  Besides, it sounds like a place we should know.”

“I would be happy to answer any questions you have,” I told them.  “Brita has been great to work with.  Mikhel is teaching her to be a barback.  She’s been super responsible about not handling the alcohol or. . . “  I stopped.  “Or working too many hours.”

Deb gave me a wry smile.  “Don’t worry, we know about the Theatre.  We’ve got some friends who are regulars, although Brita doesn’t know that.”

“And she’s been very cautious about telling us too much,” added Susan.  “I’ve asked and she says she doesn’t know how the bar got its name.”

I felt a wave of relief.  “I’m glad to hear it – we keep her out of the Theatre, and I’m not sure she’s ever been here during a party.  Mikhel keeps a sharp eye on her.  And he couldn’t be more protective if Brita was his own kid.”

I keep forgetting that it’s weird to have a cat own a bar.  But there’s no way Brita hasn’t told them.

Boss had been watching the conversation while curled up under Her tree.  Once She heard Her name, She got up, stretched, and walked on over.  Susan jumped down and made a big fuss over Her.  Boss allowed Her head to be scratched and Her back to be stroked, and even rubbed up against Susan’s leg.  It was an unusual display of affection for Boss, but then She too had a soft spot for Brita.

While Boss and Susan were getting to know each other, Deb stayed at the bar.  It turns out she was the one who was unfortunately allergic to cats, but she asked about Fog, the stray cat that Brita rescued and who became my goofy roommate.   “Do you have any pictures?  I like cats on screens, just not in person.”

Like any good cat-owner, I whipped out my phone and started showing off just how photogenic Fog was  I was busy showing Susan a video of Fog chasing her tail and bumping into a cardboard box when Mikhel came out from the back office.

“Mikhel!”  I called him over.  “These are two people you should know.”   I made the introductions and then left to attend to other guests.

But I kept half an ear on the conversation with Brita’s Moms.  Mikhel explained Brita’s job duties, and the Moms laughed about how Brita’s case worker had trouble finding the place but had eventually given up and signed off on her working there.  They talked a bit about Brita’s family, who had kicked her out of the house for being trans, and had shown no interest in reuniting.  Mikhel visibly bristled at that.

I was near enough to jump into the conversation.  “How is Brita handling that?”

Deb looked thoughtful.  “Better than you’d expect.  They didn’t support her – she was under a lot of pressure to stay ‘Brian.’  So she says it’s a relief to not have to put up with that.  But she still misses her little brother.”

Susan added, “And working here has helped a lot too.”  I must have looked surprised.  “No, really.  She talks about it all the time.  She loves it here.  She says you two make her feel good about who she is, like she’s part of the family.”

“She says,” said Deb with a bit of a hitch to her voice, “Brita says it makes the hard stuff easier.  She knows she’s got a place where she can really be Brita.”

Susan nodded.  “We figured she was too embarrassed to tell you herself, so we thought we’d let you know.”  She smiled.  “And, of course, check out the beers.”

“That was an amazing beer,” said Deb with appreciation.

Susan agreed.  “We’ll be back another time, right now we have a concert we’re going to.  But first, I want to give you each something.”  She dug in her bag and produced two small wrapped boxes.  “Here.  This one is for you, Ret, and Mikhel, this is yours.  They’re from Brita, and from us.”  She handed us each a gift.

“Thank you very much, that was not at all necessary,” Mikhel said, and insisted that the beers were on the house.

The Moms put on their layers and left the bar with promises to be back soon.   After the door shut behind them, I looked at Mikhel.  He was contemplating the gift in front of him, which was wrapped in paper with old-fashioned illustrations of St. Nicholas.  I looked closer.  “Mikhel, I have to say that St. Nick looks like you.”   Boss, who was by this time sitting on a chair at the bar, made a little “mew” of agreement.

He picked it up and looked more closely.   “Hmm.  Maybe a little.  But my beard is better.”

That made me laugh. “Aren’t you going to open it?”

Mikhel ripped the paper a bit as he tore the gift open, and I made a mental note to save a piece of it to hang in the back office – it really did look a lot like him.  The gift was a handsome gray-striped cashmere scarf.  Mikhel looked pleased and draped it over his shoulders.

“How does it look?” he asked Boss.  Boss examined the fringe as if She was waiting for it to come within range.

“Very distinguished!”  I adjusted it so both sides were even.  “But I would suggest keeping it out of Boss’ reach.”

My gift was also cashmere:  a pair of fingerless gloves in muted shades of blues and purples.  “Oh, how thoughtful!”  Mikhel gave me a puzzled look.  “Brita is always commenting that my hands feel cold.”  I put the gloves on, looked around and smiled.  “That’s the best gift, you know.”

“No, of course not.  Though I have to say these look pretty awesome.”  I held my hands up and turned to show them to Boss.  She gave them a brief glance before heading back to Her tree.  “Well, I think they’re lovely,” I called after Her.

I turned back to Mikhel.  “No, the best gift is when you really notice who someone is, and see something that would make them happy.  Like Brita noticing that my hands get cold.  Or that a scarf on you would look like a badge of office.  Like when you noticed me that first time I stopped in, and somehow knew I should work here before I knew I wanted to.”

Mikhel nodded.  “Or you.  When you noticed Brita and her friend that first time. And when she came back and you made sure she had a job here, too.”

“And you noticing that she would make a great barback and it would make her feel like part of the family.”

Mikhel looked at me over his glasses.  “What you’re talking about makes me think of Robert Heinlein saying that love is a condition in which the happiness of another is essential to your own.”

“Yes.  Exactly that.”  I felt a wave of gratitude.  “Well,” I said before that feeling leaked out of my eyes, “I’d better get back to work.”  I walked up to Mikhel and gave him a big hug and he hugged me back.  “Thanks for that.  And for noticing.

“Oh wait!”  I saw something over his shoulder and turned Mikhel around to see Boss’ tree.  “Look at that!  They must have slipped a little something over for Boss.”

Boss was on a ledge near the top of Her tree.  At the base of the tree was a small bit of ripped up wrapping paper.  Old-fashioned tinsel was scattered around the floor nearby.  Some of it was stuck awkwardly to the branches and a strand or two was hanging from Boss’ mouth.

I couldn’t help it, I started laughing.  Boss looked more guilty than I’ve ever seen Her.  Mikhel opened his mouth as if to say something, then closed it.  He gave Boss a Look as She tossed Her head a bit.