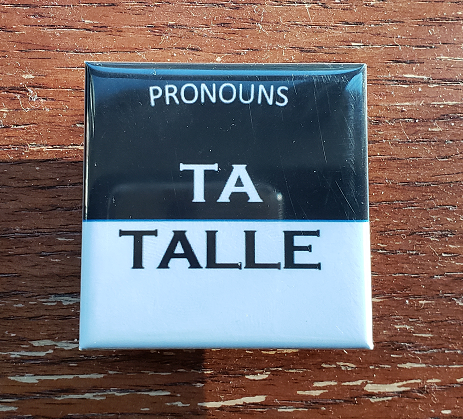 The goodies I ordered online the other day came in, so of course I had to put one on before I came in for the evening shift. Floggin’ Brews was lively that night, with most seats occupied –not bad for a Thursday evening. Ret was behind the bar chatting up a small group. I waved as I put my coat away; she waved back and then noticed the button I had attached to my shirt.

“You know I was a native Estonian, right? Well, I decided to kill several birds with one stone.” And with that non-sequitur I went back to grab an apron and check the evening’s playlist. When I came back out the entire place had gone silent and everyone was looking at me.

Scarlett had come in for a drink with friends, and she broke the silence. “You said something about killing birds??”

“Not what I said. I commented that I was getting more than one thing done with one effort.”

“And what is that on your shirt?”

“Oh, the button?! The effort.” And I left it at that. We were in a room of smart people, almost all of whom had access to Google. Let them figure it out.

I got busy behind the bar at that point. I looked up presently and there was Boss over the door, and I’ll be damned if She didn’t have that smile on Her face. I love Her for that.

After a half-hour of pouring Proof that God Loves Us (yeah, you can look that up yourself), and a whole lot of silent people with faces buried in their mobiles and tablets, Jonnie finally could not stand it any more.

“‘Fess up, Mikhel. What’s with the goddamned button?” I love Jonnie; when anyone is forthright about something, they have to send Jonnie a royalty check.

“What, did the wi-fi die? America gotten out of the cell service business?”

“C’mon. Most of the room has been looking for the answer, and no one is sure,” Jonnie pushed. “Spill.”

“Okay. You know I was born in Estonia.”

“Yes. You moved here when you were 10,” Ret responded without looking up from emptying the dishwasher.

“Right. What do you know about the Estonian language?”

“It’s weird.” This from Emily Beth, who called from across the room.

“You can do better than that, love!” I called back.

“It’s not Indo-European!” Lee proferred while staring at his phone.

“All right,” I responded. “I’ve worn out enough of your little grey cells for one night. Estonian personal pronouns have no gender.”

There was more silence, and then the rooba-rooba of a crowd quietly sharing an insight.

“That’s right. For those who need to know the answer in the back of the book, in Estonian ‘Ta’ is the third-person subjective, and “Talle” is the third-person objective, pronouns. And they’re genderless. Ta can be ‘He’ or ‘She’ (or ‘It’, for that matter), and ‘Talle’ can be ‘Him’ or ‘Her’ or ‘Its’.

“Now, some of you have commented that I cannot keep everyone’s preferred pronouns straight.” I stared at the Kinky Youth Brigade folks over in the corner. They stared right back at me. “Guilty as charged, and for that I apologize. And as a reminder to myself to be more thoughtful about it, I am henceforth to be addressed as ‘ta’ and ‘talle’. Mmm-kay?”

There was another long moment of (relative) silence. Then a small voice asked, “Cool button. Did you have it made? How much were they?” The question was then echoed by several others.

I turned back to Ret and reached for one of the oversized Paulaner glass steins; there was a promotion where you drink a liter of their Oktoberfest and you keep the stein. “See? This old dog has a few tricks left in him.”